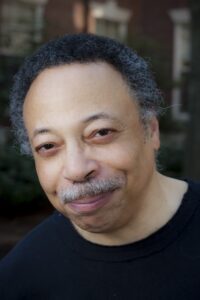 My e-mail account today is swollen with great remarks about your/our performances last night. I’ll take my time to answer them so I can keep the good vibe going!

I will now attempt to thank each of you–albeit briefly–but there is a universe of gratitude behind and within each snippet of merited praise.

I begin with Yang, who so instantly said yes to our endeavour, and then was so unfailingly astute in her comments on poems and performances–as well as cordial and committed to making all work. So relentlessly splendid was the organization.

Shirley Chen’s poster caught the luminous and ethereal aspects of our event, while also boldly presenting the 5 poets, each visage a representation of intellect and compassion, grace and force.

Ayesha started us off beautifully, with images cadenced and probing. The poetry is of us–a nation built unhesitantly on stolen property (including the labour of enslaved Africans) but reluctantly constructed of immigrant labour. I confess the poems are too beautiful to permit the critical political a whole lot of room, but that perspective is there and a terrific balance to the blessing that is the images.

David Jaeger‘s setting of the poems sends each word aspirationally upward, vaulting toward the celestial, not only so that we can glimpse the heavenly, but also be empowered–from a bird’s-eye/God’s-eye perspective to note the grit and earth of the troubled realms beneath. It’s a Baudelairian venture: By eyeing the beautiful, we also see more clearly the unjust.

Maybe that’ why Karen’s vocals are both soaring and piercing. We rise on the winged notes, but there’s also a thrill of pain in the volleying flutings, the thunderous trilling that both shoots us upward, but also shoots through us. Here’s the truth of God’s voice: It is both overwhelmingly rapturous and simultaneously mortifying. Listening to that voice is to be at The Met–in one’s own home!

Giovanna‘s poetry is also a miraculous balance of philosophicalprobing combined with emotions that are inextricably present even when she flaunts her cerebral interests. The balance is struck in the exactly worded images that let us visualize what she addresses, while also opening up the heart, searching for the moral in the flow between observant brain and deeply feeling core. What comes across is a spirit of empathy, affecting and moving.

James Rolfe and I enjoyed a magical interplay of word and music a generation ago (or so all the critics CORRECTLY noted ), and it has been a great joy to revisit our pairing, beginning anew with Giovanna’s “Namesake.” I’m no musicologist, but James’s wicked and evil (!) strength as a composer resides in his ability to find the precise array of piano plunkings to provide a spare–but elegant–melody that is then lushly fleshed out–or even fattened–by vocals. The found–iscovered–essential melody (sometimes 2) are then repeated–not as insistently as say in Reich or Adams, but still insistently holding us until the release. I hope that we may also apply this analysis to Andrea’s “Wound Turned to Light” and to the surprise encore, my “To the Poet (pace Pushkin).

Juliet Palmer is a gifted composer in her own right, and I need to hear more of her music. I think she hit the piano keys just-so, adroitly, elegantly, and adamantly–as James’s music demanded. James’s good singing was helped along by Juliet’s respectful, yet coaxing, percussive tickles, so both did the music justice.

Lisa Richter‘s poetry is also a balance of the earthy and the mysterious; her images are spellbinding because they are cast like spells; the pictures that she gives us are surprising collages, juxtapositions, and perhaps most potently present in “Jewess,” a poem that nails both anti-Semitism and sexism by taking stereotypes and utterly reversing their force, so they boomerang upon their progenitors.

Emily Hiemstra gets the double-edge knife-edge of Lisa’s edgy, nervy–and I’ll even say “ballsy” (as in burlesque)–teasing and taunting “Jewess.” Again, I’m no musicologist, but I think the setting unites the sass of Cabaret (both the movie and the genre) and Bertholdt Brecht’s political musicals. The poem is a confrontation–and so is the music–as were the cabarets of Weimar Germany. Emily’s voice–and the pianist’s playing–were vivid evocations.

Although Andrea could not be with us in person last night, Ayesha voiced the poetry beautifully. I was surprised by the eulogy for yours truly, and delighted by it, and humbled by it. But that piece–like the other poems–and “Wound Turned to Light” showcase Andrea’s particular genius for finding cadenced phrases that excavate the soul and bring into focus aspects of self or life that we otherwise may overlook.

Anna Yin–like David and Yang and James and Juliet–helped us overcome technical challenges, but I need to focus on the poems. They are wistful conjurations, conjoining the personal and the natural. In some ways, Anna is a traditional Canadian poet—looking to nature as the treasure house of symbols and images to help us fathom our own ineffable experiences and difficult to express emotions. As a translator, too, she has given us–is giving us—mirrors and windows and has mothered a great correspondence now between Chinese and English-Canadian poets. Both the piano accompaniment of Gao Yuan and the (Spanish?) guitar background of Mark Harry were satisfyingly melodic brush strokes to the palette.
My friends–allies–comrades–I will try to share with you later a selection of the positive comments that I have received today. It was awesome and fruitful, and though we ran over time (unavoidably), it was perfect.
Quoting Ellington again, “Love you madly,” and I wish Andrea a full and swift recovery. Blessings to all.

More about the event