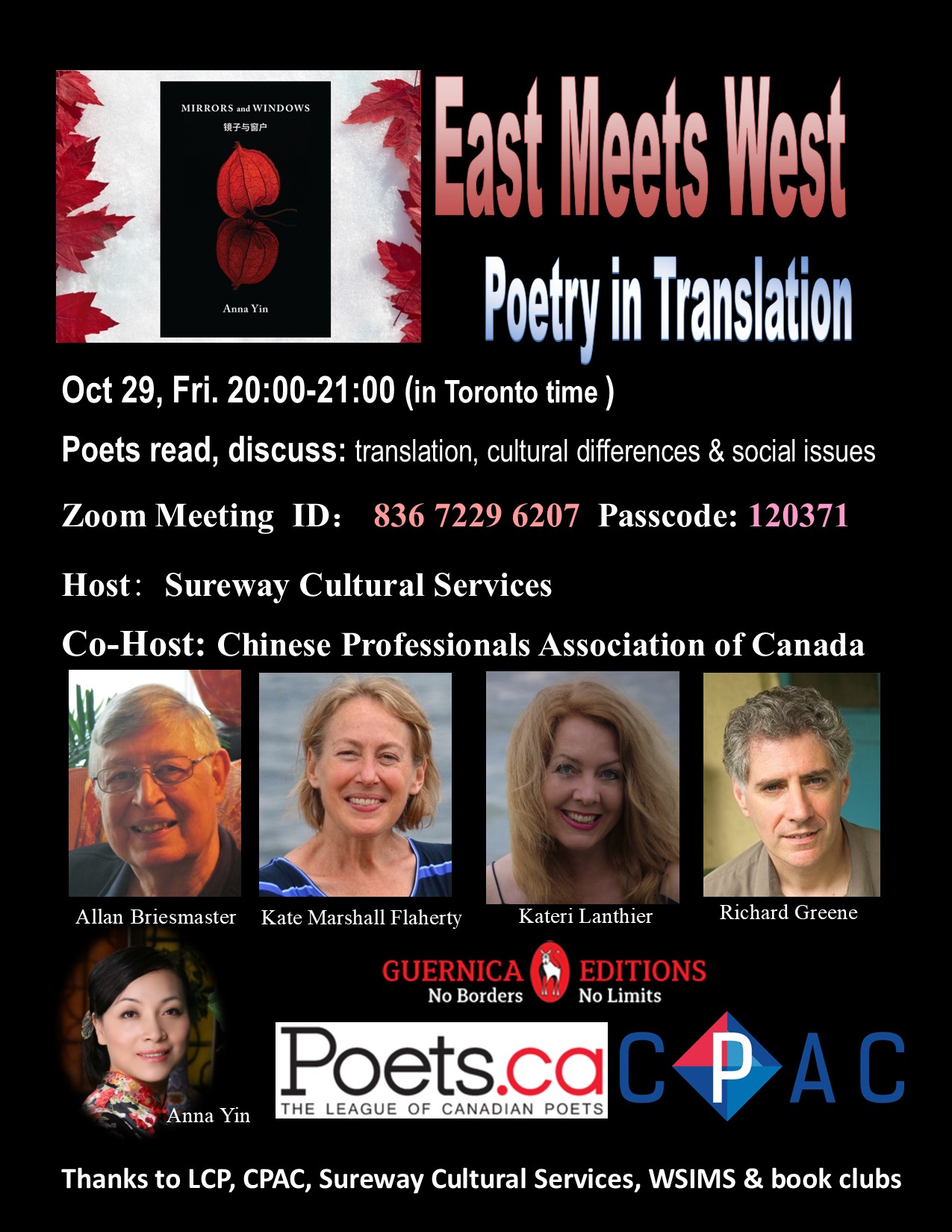 Allan Briesmaster is a poet, freelance editor and publisher. The most recent of his nine full-length books are The Long Bond: Selected and New Poems from Guernica Editions in 2019, and Windfor, published this summer by Ekstasis Editions. Allan runs his own small press, Aeolus House, specializing in limited-edition art and poetry books. He has read his poetry, given talks, and hosted readings and book launches across Canada. He lives in Thornhill, Ontario.

Kate Marshall Flaherty: Katie’s latest books are “Radiant,” Inanna Publications, “Reaching V, “ Guernica Editions, and “Stone Soup,” Quattro Books. She’s been published in CV2, Vallum, Grain, Trinity Review, and others, was shortlisted for Tifferet Poetry Prize, Arc’s Poem of the Year and others. She guides StillPoint Writing Workshops in the AWA Method and also types up spontaneous personal “p.o.e.m.”s (poems of the extraordinary moment) for people for any occasion, after inaugurating “ Poetry in Union” with the LCP in Toronto.  See her performance poetry and workshops at: https://katemarshallflaherty.ca.

Kateri Lanthier is a poet, essayist, and reviewer. Her poems have been published in many journals, including The Fiddlehead, Event, Hazlitt, Green Mountains Review, Arc, Grain, Great Lakes Review, Best Canadian Poetry 2014, Halibut Haiku, and the Literary Review of Canada. She won the 2013 Walrus Poetry Prize and third prize in the London-based Troubadour International Poetry Prize. She is a Mentor in the MA in English in the Field of Creative Writing, University of Toronto. She delivered a TEDx talk on poetry at TEDx Ashbury College, Ottawa. Her essay “Lifelines: Of Heart, Lungs, Blood, and Ghazals” was included in the anthology Against Death: 35 Essays on Living (ed. Elee Kraljii Gardiner, Anvil Press, 2019; Montaigne Medal finalist). Her books are Reporting from Night (Iguana, 2011) and Siren (Signal Editions, Véhicule Press, 2017), longlisted for the 2018 Pat Lowther Memorial Award. Poems from Siren have been included in four anthologies.

Richard Greene is the author of four books of poetry. His collection Boxing the Compass received the Governor General’s Literary Award in 2010. His most recent collection, Dante’s House was published in 2013 and was highly praised by reviewers, including George Elliott Clarke who referred to it as “a masterpiece.” He is also a well-known biographer, critic, and editor.