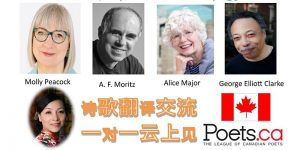 The Series of online Poetry in Translation seminars held in Aug and Sept, sponsored by the League of Canadian Poets, and hosted by Anna Yin and co-hosted by Wang Yang, featured four prominent

Canadian poets(one each session), discussing the promise and problems of translating their poetry (particularly into Chinese) with the moderators and other participants in the zoom meetings.

The international gathering (with those sharing hailing from the Unite States and Mainland China as well as from Canada), provided interesting samples of the work of the four featured poets, and translations of these poems for the forthcoming book “Mirrors and Windows” by Anna Yin. Thus, we were treated to a broad discussion of the translation of sentiment, philosophical concepts, scientific and religious ideas, and political issues, from one language to another, as the poetry of Molly Peacock, well-known U.S. and Canadian poet, A.F.Moritz, current Poet Laureate of Toronto, Alice Major, Edmonton first poet Laureate, George Elliott Clarke, former Poet Laureate of Canada, came under review.

Operating at a high intellectual level, but conducted in the manner of a conversation among friends, open to all interested, this seminar series illustrated how IT can be used effectively in cross-cultural educational efforts. A real success!

Another wonderful evening.  This series has brought 3 wonderful new poets to my attention, Molly, Alice and you. I am contacting my bookseller in Dundas who specializes in poetry to order collections that have been mentioned in the series.

The discussion of translation strategies has been another gift.   I cannot question my 17th century poet as she is beyond my reach.  I can make use, however, of the versions other translators have made of Dream to test my interpretation of various difficult phrases or passages.  I can also study the way she uses language throughout the poem to throw light on specific challenging passages.

Your practice of analyzing  the source of the difficulty is such a productive and sound approach.  And allowing yourself to be enthusiastic and confident that you have got what your poet was trying to communicate.  Mine was writing in the shadow of the Spanish Inquisition about controversial scientific subjects so the poem is coded very carefully and at the same time audaciously.  What a courageous and lively person she was. I want everyone to meet her.

Thank you for all the work you’re putting into this series to help us enjoy this world of poetry in translation.

See you again in Session 4 with the irrepressible George Elliott Clarke.

“Thank you for the invitation to attend the virtual presentation hosted by Anna Yin with Toronto Poet Laureate A.F. Moritz. I was captivated by both the poetry readings and the conversation surrounding the subtleties and challenges of translation. It was evident that Professor Moritz and Ms. Yin are passionate about their art, but it was also clear that they have an equal reverence for the poetic art of others.

It was interesting to hear how Professor Moritz preserved the flavour of Pablo Neruda’s poems by maintaining internal assonance and by choosing words that are similar in both English and Spanish. An example of the latter is choosing the word “clear” as a translation of “claro”. If I recall correctly, Moritz described the process of translating poetry as a type of “marriage” and that the experience of trying to rebirth a poem from one language into another is both exhilarating and exhausting.

It was also intriguing to listen to Anna Yin discuss the challenges that occur when a pronoun, which might exist in English, simply does not occur in Chinese. It seems that sometimes interpretation is required of the translator, along with patience, insight and judgement. What a burden of responsibility!

I am curious to know about Moritz’s translation of poetry written in French. Typically, English to French translations require many more words. Is this also true of poetry? Do French poems become shorter when translated into English? These are questions that I would ask if I had the opportunity. It seemed to me that Ms. Yin’s translation of Professor Moritz’s poem was longer… but, it certainly sounded beautiful.

So, once again I would like to thank you for opening the doors to this event. It was stimulating, thought provoking and the poetry was absolutely delicious – whether I could understand the words or not.” –From Elizabeth Hurdman

“Al, you made me want to learn Spanish for a moment when you recited the poem ? Anna, you reminded me that in written Chinese we do not have a gender-neutral pronoun of “they”, while in spoken Chinese we refer to “he”,”she” and “it” with one same sound “ta”. I guess this “ta” is the reason I tend to misuse “he” and “she” a lot when I speak in English ☹ Or maybe I always see “the female strangeness of their male force” ^_^. Thank you for introducing the wonderful poets to us! It is such a privilege to be given the keys to your doors in that couple of hours, and get inspirations from your poetic and intelligent hearts!” –From Yang